So Much Tokyo, So Little Time

We’ve both wanted to go to Tokyo for years. From the pop culture on steroids, to giant arcades with the latest games that you can’t get in the States, to the food… what’s not to like about Tokyo, before even arriving?

But Tokyo even exceeded our high expectations. Two things stood out. First of all, the people – we encountered so many nice people in Tokyo and in fact in all of Japan. The people are really a national treasure of Japan! Secondly, Tokyo was much quieter than we expected. It is a giant metropolis, so we expected all the noise that comes with that. However, because trains are so prevalent, motor scooters, buses, and cars are all very few in number on the streets. 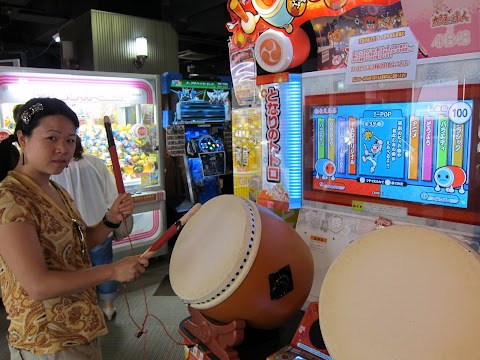 We made it to a “gamu senta.” This taiko drumming game was so much fun that we both got blisters. 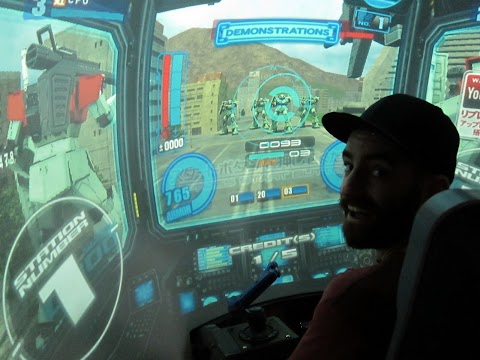 Stu plays a mech warrior game in an all-immersive pod.

Top on Stu’s list in Tokyo was to go to an arcade. The drumming game was a lot of fun, and I was also amazed by the tech of the mech warrior game. However, that one was a bit too difficult, as most of the Tokyo arcade games are. 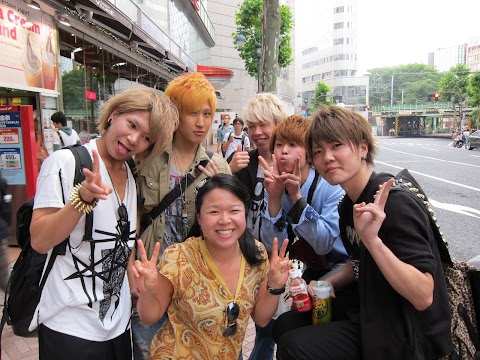 Mags had to get a picture with super-stylish teenage boys in Shibuya.

Next on the agenda was to head to the Shibuya district, where all the latest teen fashions and costumes are on display. There are also tons of remarkably expensive second-hand clothing stores. $50 used Jansport backpack, anyone? 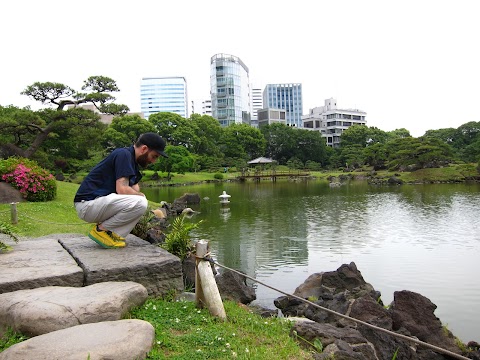 Stu ponders life while looking into the tidal pond at the Hama-Rikyu gardens.

We also went to check out the Hamarikyu Gardens, which contains the last tidal pond in Tokyo. It was quite peaceful, and a nice respite since I was nursing an energy-sapping cold. 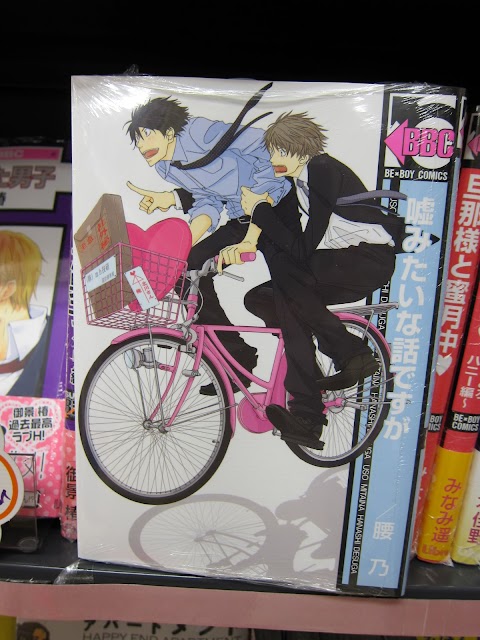 two men in love on a bicycle at the 7-floor anime store.

One of the more interesting things we found in Tokyo was in the Akihabara District. We went into a seven-floor anime store, which had three floors marketed towards female readers, and consisting mostly of gay anime, such as the one you see above. And indeed, there were quite a few women interested in these floors!

We also made it to the seven-floor Sega arcade, which we found was most entertaining to just watch other people, because the games themselves were impossible for us to win. 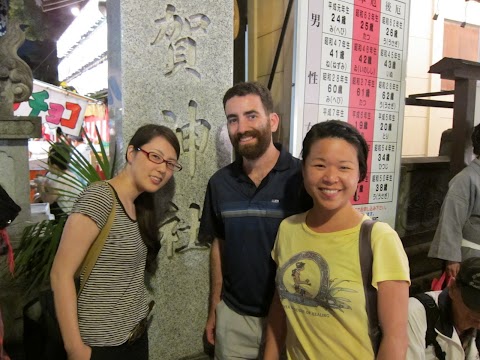 We were blown away by the kindness of our Couch Surfing host, Mayuko, with whom we stayed for four nights. 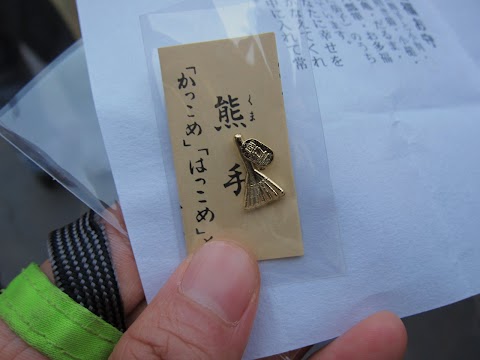 Mags said a prayer to God, the spirit responded with this rake, to rake in good fortune. As long as we stay relaxed we will have good luck while travelling. 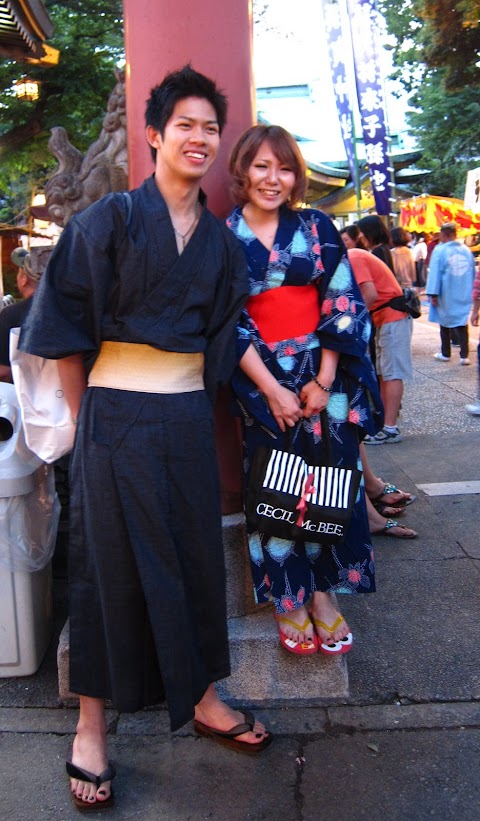 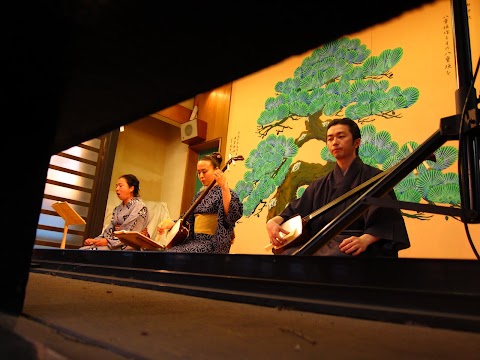 traditional Japanese Shimasen music and singing on the Temple stage 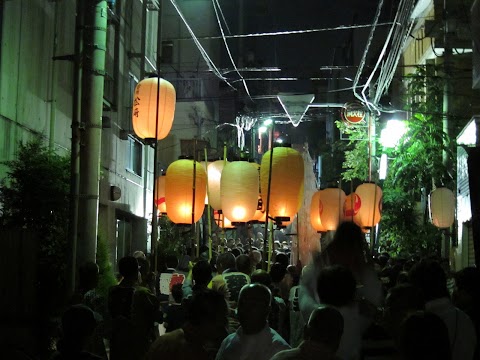 Mayuko took us to the Yatsuya Suga Shrine Festival, which to me partially had the feel of a county fair in the States. But of course added to that is traditional song, dance and clothing; fortune telling at the shrine; and the carrying of the mobile shrine. It was really quite a lot of fun. 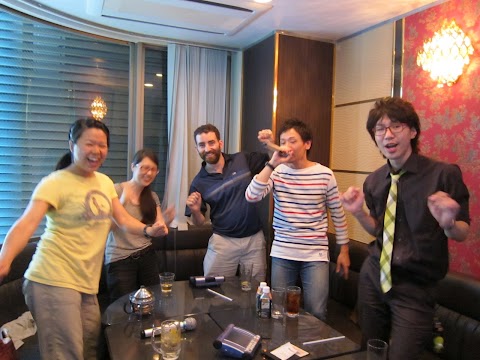 everyone gets in on the action at karaoke

After the festival, Mayuko took us to karaoke with three of her friends. Japanese people take their karaoke seriously; the building was nine stories high and pretty high class.

Most of the action you see above was all in one day. And, being sick, we decided to keep it light the next day. The only real focus was dinner, and what a dinner it was! 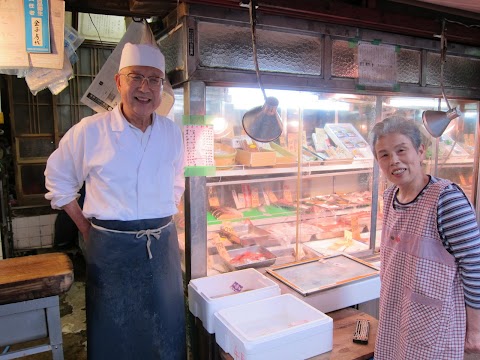 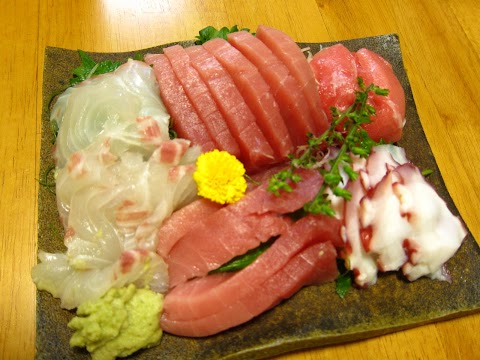 We bought this amazing fresh sashimi platter from the fish shop. 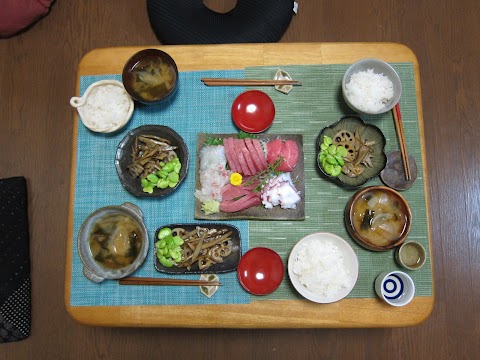 Mayuko rounded out the sashimi platter with some “oyishi” typical Japanese food.

After our relaxing day, we went with Mayuko to go shopping for dinner. Fresh sashimi and produce produced the meal above. Mayuko cooked lotus root, miso soup, rice, broad beans, and mountain greens. We “washed it all down” with her favorite sake and of course some Japanese beer. 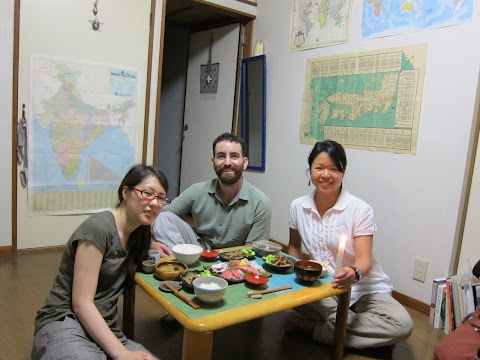 Happy travellers and happy host about to enjoy their meal. 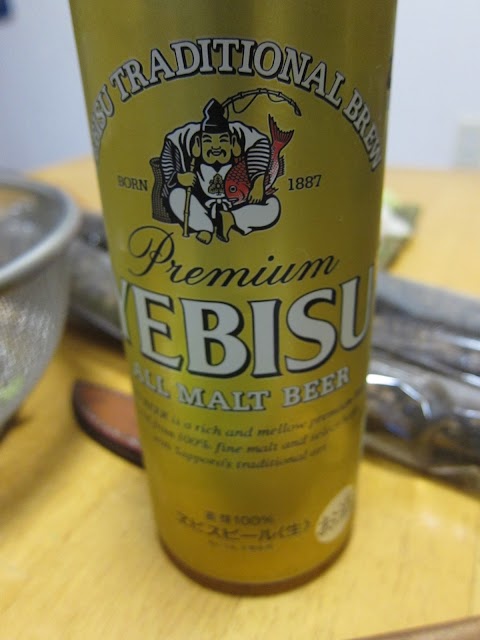 Thankfully, Japanese people love their beer, because so do I. There are so many different varieties. I think it all mostly tastes the same, which is OK, because that “same” taste is a nice, crisp, refreshing one. This beer was one of Mayuko’s favorites.

Tokyo and all of its people really treated us well! After Tokyo, we headed to Tochigi, where we stayed with Coi’s family, a classmate from Taipei. That and the rest of our Japan travels will have to wait for a later post.

For the full album of Tokyo pictures, click here.

This entry was posted in Cute, food, Japan, Religion. Bookmark the permalink.

4 Responses to So Much Tokyo, So Little Time