It has been a hectic few weeks. We had a garage sale on a rainy day, and I (Stu) was hit by a pretty bad flu that day. Mags had to go solo for some time while I let my body convince me that I was absolutely freezing in bed. AKA I had a horrible fever and chills.

Despite the rain and the illness, we sold most of our furniture that day, and a good deal of other stuff as well. (A special shout-out to Kemi who was a godsend on garage sale day. Thanks!) And after deciding that we were going to keep our Tempurpedic bed, which requires a moving truck to move, it made sense to keep a good deal of our other stuff as well. Anything that we loved, or that was quality we kept and put in the moving truck to move to Mom and Dad Chuang in Irvine.

We spent a few days in Irvine where we both continued to be sick. Despite being sick and sleeping most of the time, we did do a few things while in Irvine. The four of us (including Mom and Dad) drove to San Diego for Thanksgiving to celebrate with Ernie, Tiana, Rei, Myles, and other family and friends. The turduckhen, stuffing, pie, cake, and much much other food made for a very stuffed and delicious Thanksgiving, and it was great seeing family for the holidays.

That night we actually went to an insane Black Friday at the outlets in the desert. It was remarkably crowded. Mags and I just bought some sneakers before heading to the van to nap and wait for a few hours for Mom and Dad.

When we came back to San Francisco for our last two weeks, our apartment was empty of most furniture but still full of junk to be dealt with. It was definitely overwhelming at times, and it didn’t help that we had to adjust to sleeping on camping sleeping pads. I am doing better with it now, but the first three mornings or so I woke up grumpy and in pain. I’ve learned a few tricks and I think my body is adjusting, so I am sleeping much better on my pad, which is important because we will definitely be using them throughout the year.

Two weekends ago, we met with cousins Helen and Kristy to do business planning. Of course Kristy is in full swing with her successful editing/writing-coaching/business-coaching business, and Helen is having success in getting her counseling business off the ground. Mags and I both have put lots of thought and dreaming into our healing cooperating and permaculture farm business ideas, so it was great to sit down with a room of smart people led by exceptionally skilled and patient Kristy to turn our dreams into practical plans. We will soon put a page up on this site with our basic business plans.

Sheila and Matthew threw us an amazing going-away party. It was a performance party and we were quite touched by what people said, the effort people put forth, and the fact that people who we never thought would perform in fact did give surprise performances. We so appreciated everyone that came out and all of their well wishes. We will miss every single one of our friends and family in the Bay Area! Pictures from the party should be forthcoming.

This past weekend we visited a forming intentional community in Placerville. We will go more into our future living plans later, but for now I will just say that “intentional community” is a broad term for people with similar values and dreams work out a way to live close to each other and intentionally form a community. The two folks in Placerville were very friendly and have dreams that are very similar to ours. We are looking forward to keeping in touch with them and seeing what kind of progress they make with forming their community over the next year.

The last week we have been blessed by three helpers that must have been sent down from heaven. Billy lent us his hatchback car for the week, and was a gracious host for us at his new place in Sacramento, after our day trip to Placerville. Alfonso swung in out of nowhere with a pickup truck after we asked him last minute to store our bicycles in his garage for a year. We had to make this change of plans because a confluence of roadblocks kept raising and raising the cost of transporting our bicycles to the East Coast until the cost was $340 for the two bicycles. We made a spur-of-the-moment decision to change our bicycle touring plans from Virginia-to-Vermont to originating in San Francisco instead. We thought our future selves would appreciate the $500 total savings that this would give us. And besides, the West Coast is beautiful as well, albeit in a different way than the North East. 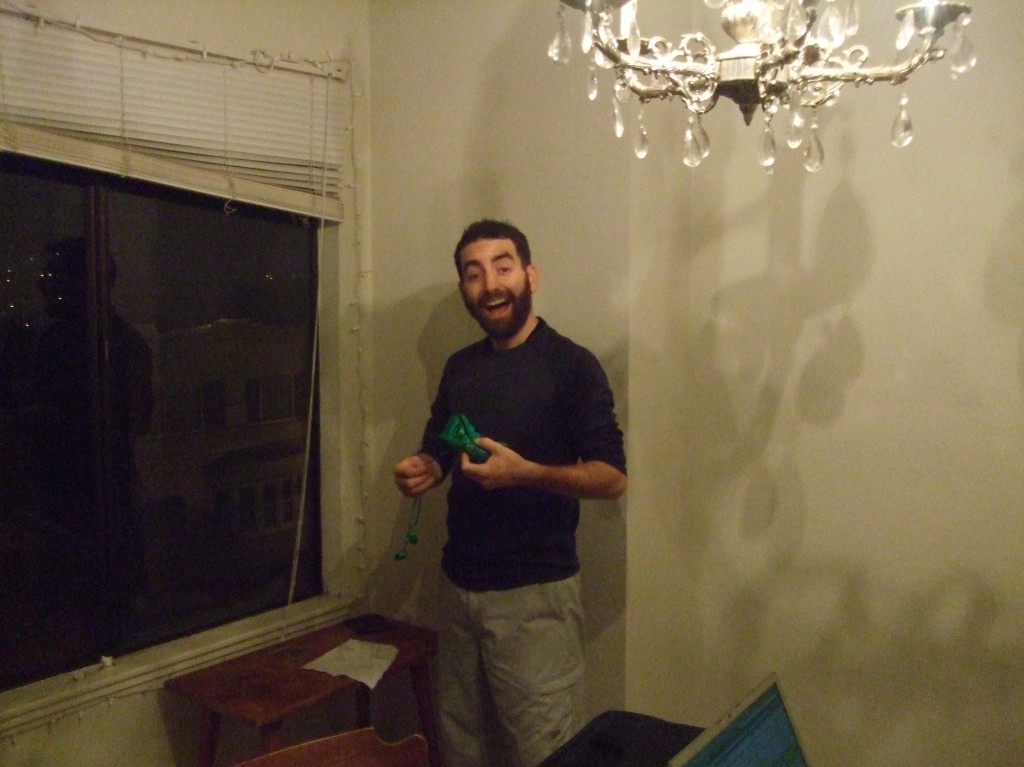 way too excited about packing 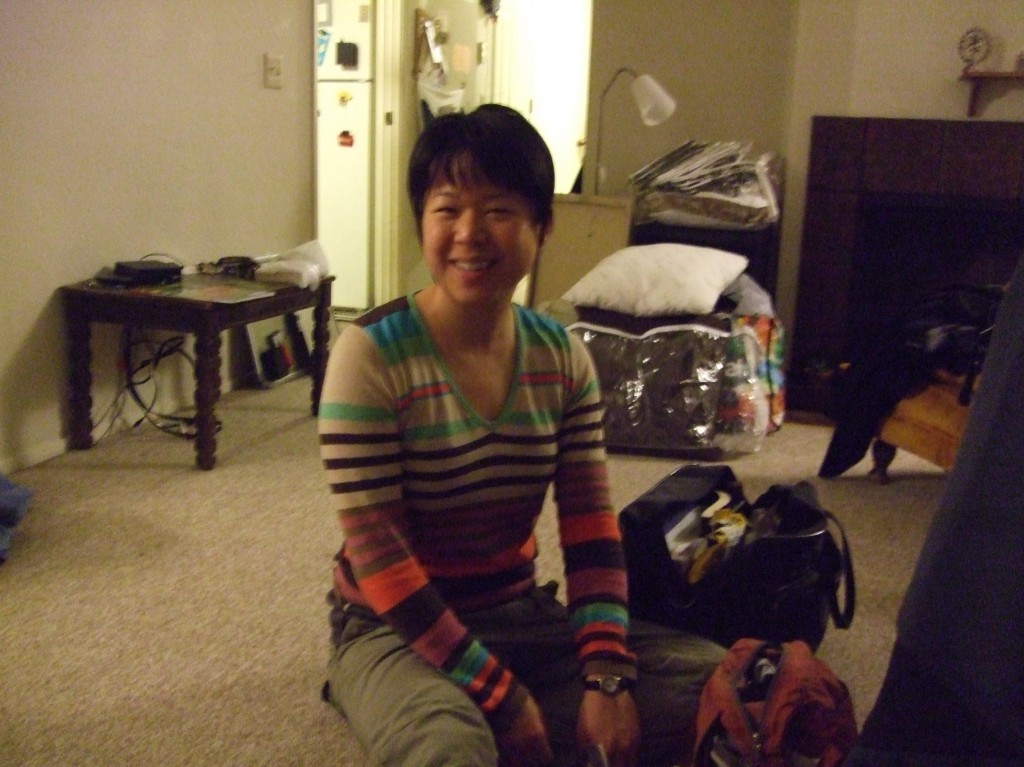 pack it up, pack it in, let me begin

Also, Peter responded to our last-minute request and came to San Francisco yesterday, our last day in San Francisco, to help us with anything we asked him to with regards to cleaning out our apartment. We are truly blessed to have such great friends.

We ended our stay in San Francisco by having dinner with Peter and cousins Pablo and Sherry. This morning, Peter accompanied us to the Amtrak bus station. It is really good that he did because, for now, we have a remarkable amount of luggage. Thankfully over the next month we will be shedding luggage in different places until we are down to just our backpacks when we leave the country. Pablo also ran (literally) to the bus station to send us off, and Kristy was walking as fast as she could to catch us. She missed us by a couple of minutes but that did not diminish how touched we were by the send off. It was really nice having local family send us off with love in our last 13 hours in the city. 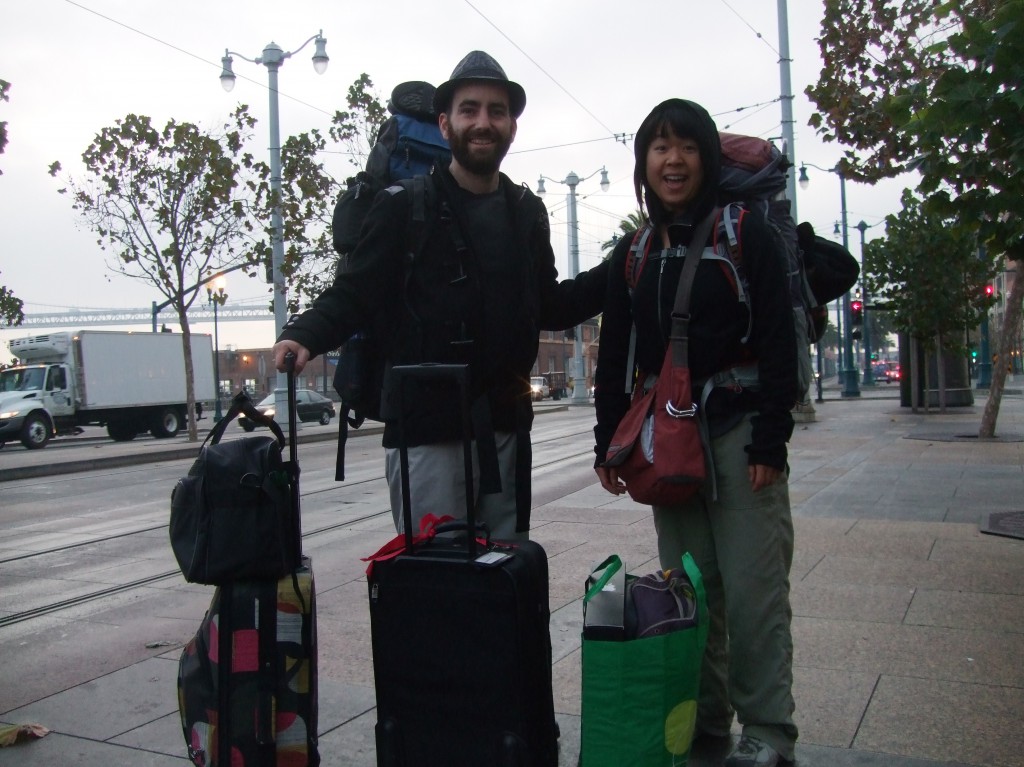 At the San Francisco Ferry Building with way too many bags. We will be ditching them in various fashions here and there until we leave the country with just our two backpacks. 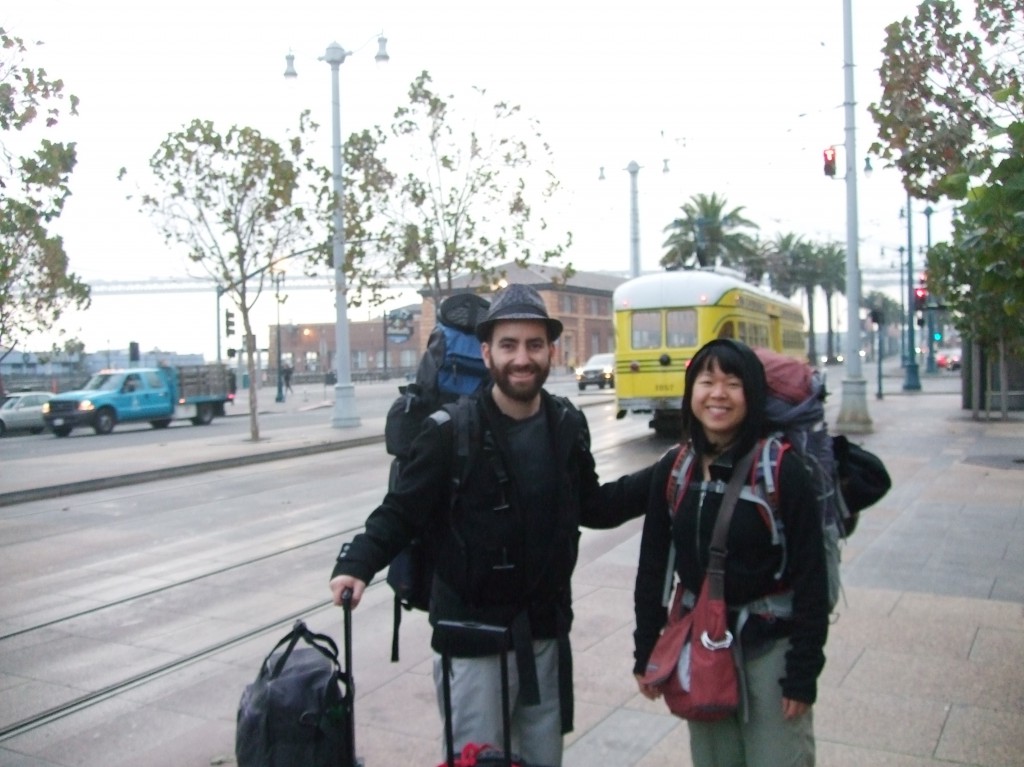 iconic historic streetcar and Bay Bridge. What a scenic way to say bye to the city!

Now we are on the Amtrak train from Oakland to Los Angeles. We’ll eventually take the train all the way to Harrisburg, Pennsylvania in a rather meandering fashion, but I’ll go into more detail on this train trip as it happens. For now I will just say that it feels GREAT to finally be all packed up and on our way!

This entry was posted in Amtrak, Intentional Communities. Bookmark the permalink.