From Detroit, we drove to Bloomington, Indiana, home to the Indiana University, Hoosiers, and the center of Buddhism in the Western world.  We originally were drawn to Bloomington for permaculture roots, and the value of local food and agriculture. One of our favorite magazines, Permaculture Activitst, is published here, in addition to well-known permaculture teachers. 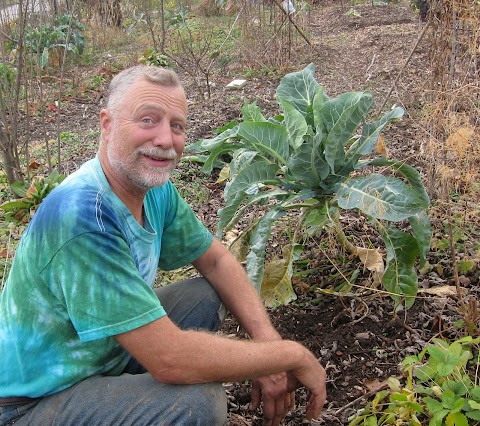 We visited Keith Johnson of Permaculture Activist Magazine at his home.

We visited local permaculturists Keith and Peter’s home. Keith was kind enough to show us around as he worked in the gardens. Their yard is a permaculture paradise, with food forest, ponds, rain catchment systems, and more. Every system ties into every other system. 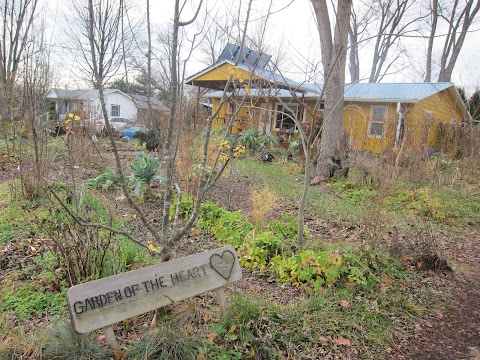 Peter and Kevin’s permaculture home in Bloomington, IN

Bloomington is also home to a lot of innovation in terms of where local policy and roll-your-own buildings can meet in the middle. The local government is really receptive to new ideas, rather than just applying the same standard zoning molds to the whole city.

One place that has taken advantage of this environment is Dandelion Ecovillage. They are planning and starting initial constructions for several homes built from scratch, as well as cooperative business ventures from massage therapy to machinists. They will have no private automobile ownership, and will have small-scale commercial farming on the property.

Nathan has a sweet spot out in the woods where he lives with his family. He, too, has hand-built buildings and a commercial farming operation. He even has a goat! 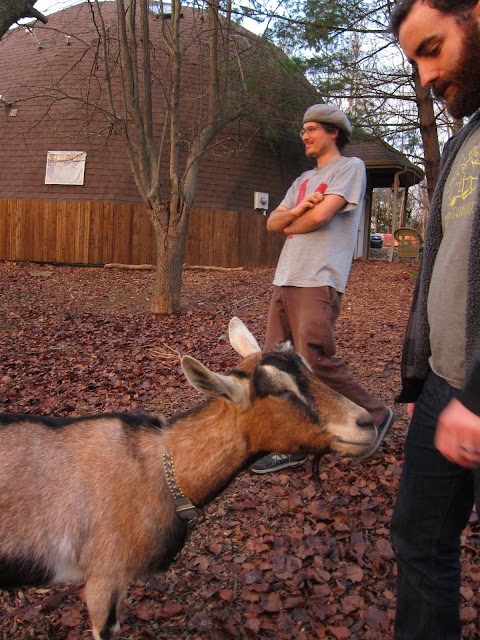 Nathan, the goat, and Stu!

One of the surprising things about Bloomington, being a town in the Midwest, is the great diversity of food available there. There are great restaurants from many cultures. We had amazing Turkish food at Turkhuaz Cafe and tasty beer at Upland Brewing with Stephanie (our friend Kat’s sister) and her husband Brian. They were great company. We also ate Nepalese food at Anyetsang’s Little Tibet and really great local organic brunch from Farm Bloomington. To top it all off, Bloomington has a local food co-op called Bloomingfoods and a great farmer’s market that is even running during the winter. A nice collection of cafes, too… at Blu Boy Chocolate Cafe and Cakery

One of the ways that we knew Bloomington was a cool place was that we had met so many people in San Francisco and in our travels who are from Bloomington, or have friends in Bloomington.

Our former SF roommate Katie has a friend, Kirsten, in Bloomington and hooked us all up together. We went to Kirsten and Frank’s house for dinner. Frank’s brother, as well as some other friends and some young travelers were over for supper. Frank made really excellent Indian food, and then a small concert broke out later.

While in Belize, we met Megan, a teacher in Mags’s Mayan Abdominal Therapy class. She and her partner, Brian, live and work in Bloomington. We met up with them for the farmers market as well as a visit to the lovely Tibetan Cultural Center. The Dali Lama’s brother lives in Bloomington, and the Dali Lama visits every couple of years, so Bloomington is seen as the center of Buddhism in the United States.  Megan clued us into the health and healing scene which is thriving in Bloomington.  We stop in to Thrive to check out the space as a potential place for Mags to work and get some Community Accupuncture.  We also meet up with Megan’s Aunt Ann Kreilkamp, who actively pushes for zoning changes to allow community gardens, and started Green Acres Neighborhood Eco-village, a retrofit cohousing community. We were impressed with how nice and welcoming the community was.  Thank you to all we met and shared your time with us! 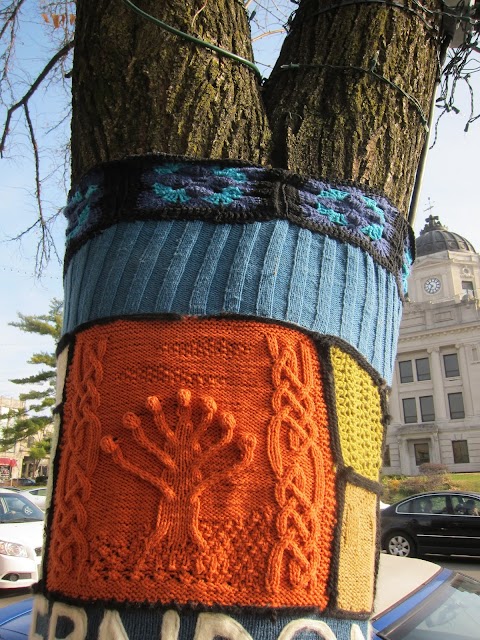 Trees are knit and cozy in Bloomington town square, City Hall in the background.

Being a good-sized town of 80,000, with a major university, Bloomington has a really great downtown. It is quite walkable, with a nice library, book stores, and anything else you could want. Boxcar Books especially was a great volunteer-run anarchist bookstore. 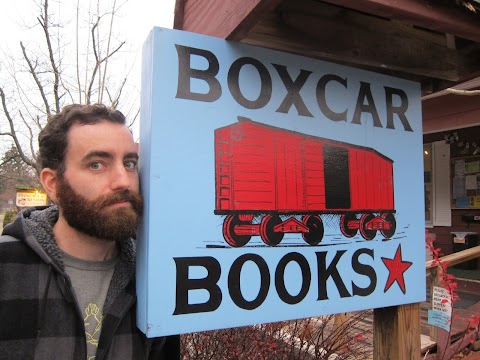 To anyone considering moving to Bloomington, I would recommend locating yourself along the B-Line Trail. It allows you get into downtown by bicycle or foot even from several miles south of downtown. You could even get a few acres to run a farm along this trail!

For full pictures from this part of our trip, click here.

This entry was posted in Bloomington, farming, Intentional Communities. Bookmark the permalink.