Another Cross-Country Amtrak Trip, and NYC

After two months in Irvine, where Mags was able to recuperate from her bicycle accident, it was finally time to hit the road again, or the rails, as the case may be. For the fourth straight winter, we took the train cross country. 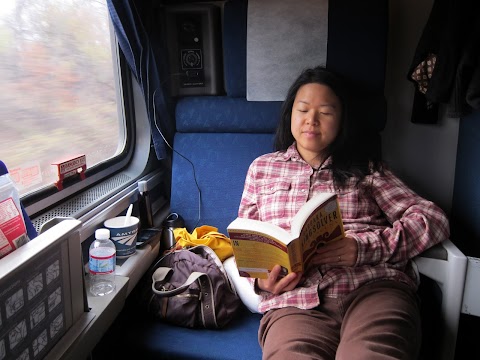 I highly recommend traveling by Amtrak to anyone who can spare the time. It takes about three days to get across the country. It is best if you are able to travel with a companion, as it makes the roomette accommodation more practical, money-wise. The roomettes come with three meals per day in the dining car, morning coffee and newspaper, and use of the shared restrooms and shower. The roomette itself is pretty comfortable, with bunk beds that tuck away during the day for a nice sitting room.

This year’s route took us from Irvine to Los Angeles to Chicago to New York City. 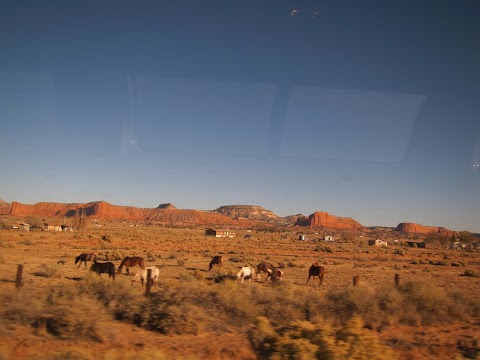 We had some great views such as this on our Southwest portion of the route. 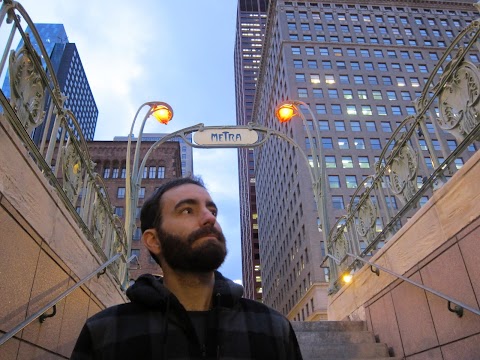 We did get to spend several hours in Chicago during our layover.

Finally we arrived in New York City, where we stayed with Javon for a few days. This whole portion of our trip was actually brought about by a bet about the 2012 NBA Playoffs. The result of the bet was that Peter-man, Javon, and I would meet in person for top-shelf whiskey. 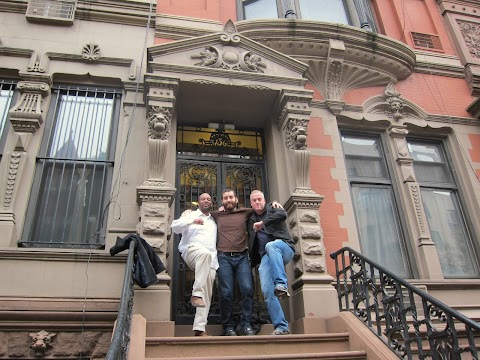 Javon, Stu, and Peter getting ready to be up to no good

We all checked out the American Museum of Natural History. 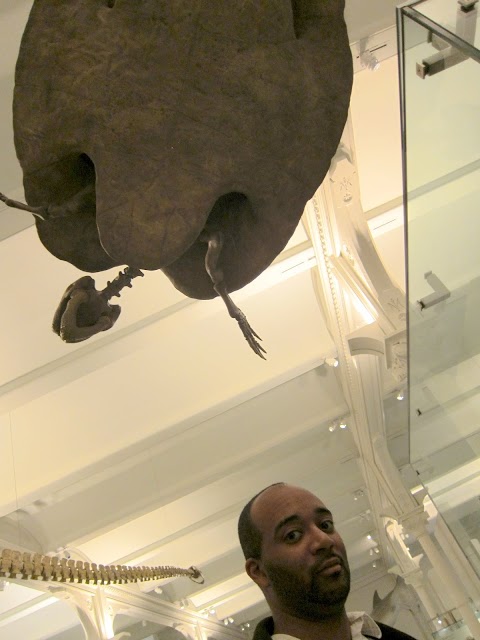 Javon and giant sea turtle from the age of dinosaurs 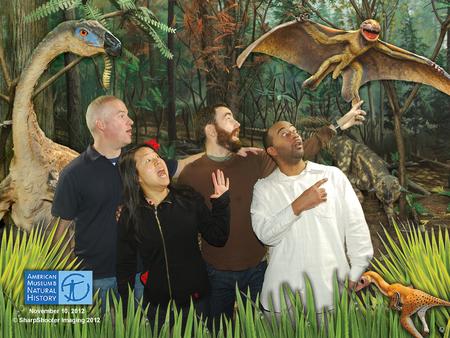 We’re blessed to have friends and family in many different parts of the country. We met up with Cousin Jodi, a talented actress and film producer.  She showed us around the Lower East Side of Manhattan during the first snow storm in two years. Jodi works at a really great vegan restaurant called Angelica Kitchen, which we went to twice during our stay.

We went with Jodi to the Rubin Museum of Art. It is a museum focusing on Himalayan art, featuring detailed icons of Buddhist and Hindu art. Afterwards we went and got Tibetan food! 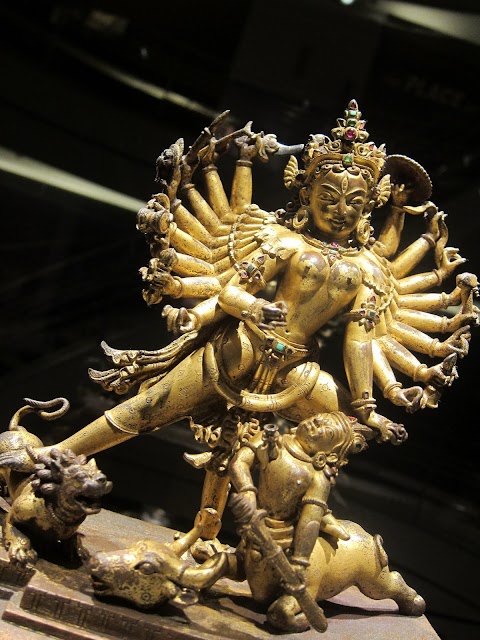 Fierce Durga with her lion companion overcoming the demigod Mahisha who endangered the order of the world. 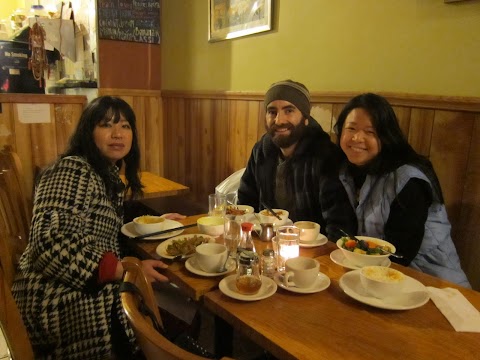 We also got to spend a fun-filled evening with Mags’s friends from working at Burningman 10 years ago, Bea and Manny, and their son Ezra. We all shared memories, and Bea and Manny told us what it was like for them during Super-storm Sandy. Thankfully, despite some power loss and loss of some personal property due to flooding, their family was safe and healthy throughout the storm. 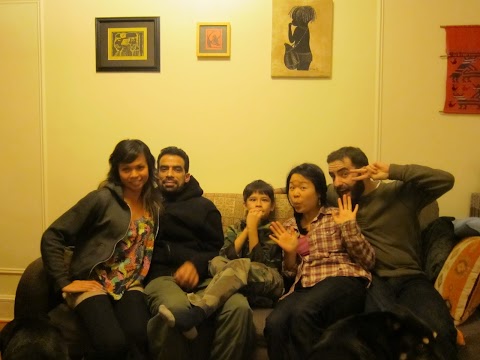 Mags caught up with high school best friend Egbert, whom she also hadn’t seen in years. 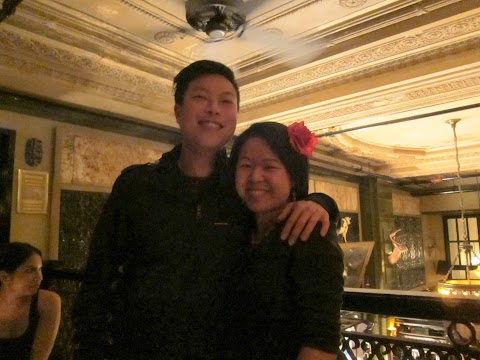 Egbert and Mags, friends from high school, at the Ace Hotel 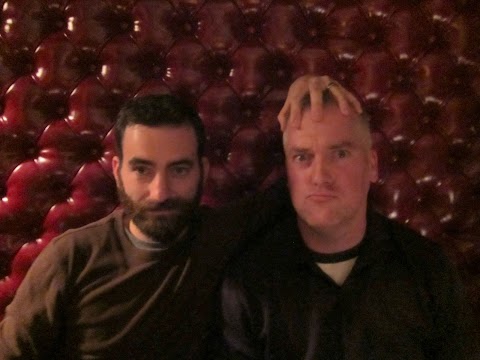 Peter-man and Stu goofing around

What a packed few days in New York City! Of course there is so much to do and see in the city. Special thanks to Javon who shared his home with us during our stay! 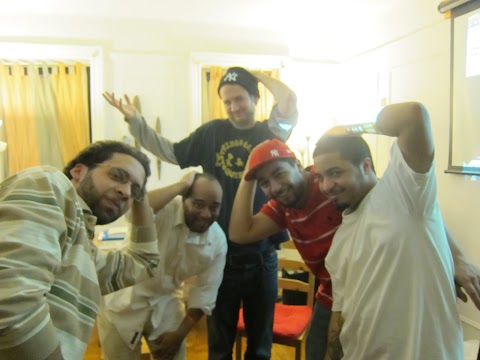 More photos from this part of our trip on our Picasa page.

This entry was posted in Amtrak, New York City. Bookmark the permalink.

1 Response to Another Cross-Country Amtrak Trip, and NYC